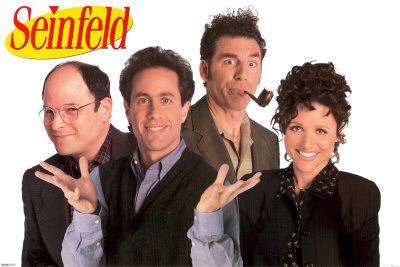 I love Seinfeld. I’m not a super fan or obsessive about it (especially since the show ran while I was ages 2-11) but I’m always up for it, because it always makes me laugh. There’s a Seinfeld episode for every random life situation. That’s what’s so great about it. The show ended 15 years ago, but somehow it still resonates with people. Except for one minor thing: most episodes of Seinfeld would be impossible today.

Think about it. Think of all those really great episodes, and all those moments that leave George, Elaine, Kramer and Jerry baffled, where you and I would just pull out a cell phone. Technology has sky-rocketed in the past 20 years, and a lot of their sticky situations could easily be averted with an iPhone. There are countless incidents where they needed to get a hold of one another in a pinch, or look up a movie time, or find some random factoid on the internet, and they could do that in a snap if they had smart phones. But with that addition, those episodes would also be shortened to 5 minutes, and no one would watch them. But that would suck, so let’s just watch them and find some enjoyment the technology gap, shall we?

Here are (a few) of my favorite episodes that wouldn’t be kosher in a more modern-day sit-com:

1. “The Chinese Restaurant” aka the episode where they’re waiting for a table at the Chinese restaurant.

First off, George wouldn’t need to guard the pay phone, because that woman would simply call his cell. And as for waiting forever for the table, they could either Yelp/Urban Spoon a different restaurant within 3 blocks, or use one of the zillions of movie apps to find a different theater or movie time. Meanwhile, they can give the Chinese restaurant a bad review on Yelp. Bam.

2. “The Bubble Boy” aka the episode where they go to visit the Bubble Boy and Jerry loses sight of George on the highway.

All this needs is one cell phone call and a Google Map adjustment. Two minutes and they’re back on the route (and George doesn’t almost murder the Bubble Boy). Kramer could’ve also called to say he was on his way, though I don’t think that would’ve averted him burning down Susan’s father’s cabin.

3. “The Burning” aka the episode where Jerry’s girlfriend’s use of “it’s me” on the phone causes issues.

4. “The Boyfriend” aka the episode where George gives the unemployment office Jerry’s number and address as “Vandelay Industries.”

Text on the way out of the office. Easy as pie. Also, don’t let Kramer near the phone, but that’s more of a general always rule.

5. “The Junior Mint” aka the episode where Jerry can’t remember the woman’s name, but knows it “rhymes with a part of the female anatomy.”

First of all, he would have her number in his phone, and I think Jerry would be the kind of person to use names. And second, I’m sure Siri could have been helpful here. I’m not exactly sure what I would ask her, but I bet she’d get it eventually.

6. “The Parking Garage” aka the episode where they are lost in the parking garage.

First, to find the car they could have systematically gone around the levels using the clicker to make it beep and find it faster. They also could have made a note on their iPhone as to where they had parked the car. Kramer could have done the same for where he hid the air conditioner, and they all could have called each other when they were separated instead of wandering around like idiots. George might have even made it to meet his parents, and they probably wouldn’t have been arrested for public urination.

What do you think? Cancel reply

I’m kind of a big deal. Except not really.